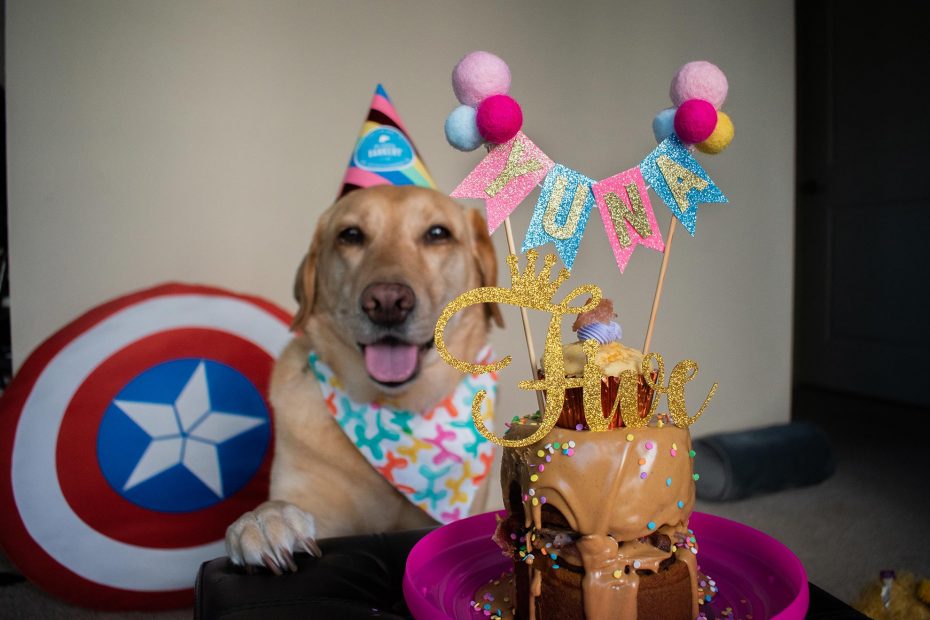 Yuna, my yellow Lab rescue, is now five. As I’m about to let her devour a piece of her gorgeous “Barkday” cake, I can’t help but think how crazy it was that she almost didn’t make it.

I usually don’t hype up birthdays, but Yuna turning five is absolutely a big deal. Because as of today, I can claim that she has successfully doubled her life expectancy.

Had things run their natural course, Yuna might have met her end prematurely two and a half years ago.

So while today is a festive day full of head scratches, belly rubs, and delicious cake, I find myself reflecting back on Yuna’s rescue story.

Every so often, I spent the odd evening browsing online listings by local Seattle shelters, when I came across a goofy, naïve-looking yellow Lab. She had those adorable circular eyebrows, a big boop-able snoot, and overall, just looked way too friendly for her own good.

Renee, they called her. She was from Korea, and she caught my attention immediately.

I had barely been in Seattle for a month. I’m not usually one to do things on a whim, so when I impulsively hit “Send” on a message asking about Renee, I surprised even myself.

But surprise quickly turned to shock as I read more about the listing. Renee, allegedly, was currently being held in a Korean meat market.

I had heard about these meat markets before. Across some cultures, eating dog meat was not only accepted, but common. In Korea, dog consumption had been practiced for centuries, although in recent decades it has declined greatly. Today, an estimated 84% of the Korean population say they don’t eat dog, and almost 60% would support a legal ban.

But at least for now, the Korean meat markets are still very much in operation. Some still see dogs more as Saturday’s main course than loyal household companions.

Dogs in the Korean meat markets are kept in dire conditions. I’ve read accounts of dogs being fed poorly and crammed in cages with other dogs, with little space to move about. They don’t get much of an opportunity to be let out to relieve themselves… and so it really begins to reek. Little to no care or is given to them. Sometimes they die. Some of these dogs are literally trapped in close quarters with other corpses.

As if that wasn’t bad enough, I would later connect with others on Instagram who detailed some of the torture that goes on behind closed doors. I learned of one rescue dog in particular who sustained brain damage from lack of oxygen after being hung and blowtorched.

Oh, these stories made me livid. Dogs being tied up and beaten. Electrocuted. Exsanguinated. Boiled alive. And even if somehow they survive this, it’s a life of trauma ahead.

Could this have been Renee? Certainly, from the friendly look in her photos you wouldn’t think so, but sometimes I do wonder just how much those pearly eyes have seen.

After some back and forth between the shelter, they informed me that Renee was flying over from Korea, straight to the rescue dog adoption event. If I wanted to adopt her, that was my opportunity to meet her. So I went.

I forgot that she was supposed to be cute. Actually, she scared me.

Renee was in a large crate on her own, noticeably agitated. She darted around restlessly, her scrambling paws making loud banging sounds against the floor. She was barking nonstop at the other dogs. Volunteers tried to calm her down, but she accidentally knocked over her water bowl and banged her snoot against the crate.

Eventually, they covered her crate with a large cloth to give her time to cool off in isolation. While I couldn’t see her, I heard her continued frantic pacing. I stepped to the side, anxiously waiting for her to calm down, and reconsidered whether I really should adopt her.

But what was blind to me at the time was that even though I was scared of Renee, Renee must have been terrified. Having just gotten off a long flight and thrusted into this new weird place, she was understandably stressed. I stood there, deaf to the difference between her seemingly aggressive barks, and her stressful cries for help.

After a while, a volunteer took her out of her crate for a walk, away from all the commotion and stress. I watched from a distance as he allowed Renee to get her bearings. Then he motioned for me to come over.

Still nervous, I approached Renee, who honestly couldn’t have cared less about my existence. She continued sniffing the grass while paying me absolutely no attention.

It was clear she didn’t understand English words like “sit” or “come here,” so I had previously looked up how to say these words in Korean. I had brought along some beef treats and waved them in front of Yuna as I bellowed, “Anja!” To my amazement, Renee acknowledged me for the first time and actually performed a sit!

The volunteer continued to offer me useful tips and answer my questions about dog care. Before I knew it, I was sitting at the table, signing off on the final paperwork to adopt my first rescue dog. September 1st, 2018–pencil that in our official Gotcha Day.

Up until now, the nametag on my rescue dog read “Renee.” But I wanted a different name for her.

I clicked on the first result, and scrolled along the names for female dogs alphabetically. It just so happened that the very last one really caught my attention:

Yu-Na: It means ‘to endure’; a nice naming option for someone as enduring and courageous as a dog. You pronounce it ‘yoo-na.’ A beautiful name, isn’t it?

Korean Dog Names: A Name From The Land Of The Morning Calm

Yuna. Yes, it certainly was a beautiful name.

I’m not Korean, by the way, so I had no idea if the translation “to endure” was even correct. But having known about Yuna’s background and her possible experiences in a meat market, I was sold on this name immediately. A fitting name for a rescue dog that has endured through so much.

So without even bothering to check the translation, I stuck with it. She was Yuna.

Two days after Gotcha Day, we would make our first vet visit for a routine checkup. The nurse created a new file for Yuna, and since I said she was around two and a half, her birthday was recorded as March 3rd, 2016. We have treated that as her actual birthday since. So today, March 3rd, 2021, marks the start of Yuna’s 5th trip around the sun.

I think frequently about why Yuna’s previous owners abandoned her. Based on her behavior and personality, I think she must have had a decent life, with decent owners. She came home already housebroken, super well-behaved, and very warm towards just about everyone. Who would want to abandon that?

Moreover, why did they have to give her up to a meat farm? It used to make me sick, thinking about that. How irresponsible and heartless can you be?

Over time, I’ve let go of those thoughts, and have even come to sympathize with her previous owners. I simply cannot accurately judge or criticize someone’s actions without the full context of what they were going through at the time. For instance, it’s possible they got scammed by the meat market. I just don’t know.

What we do know is that Yuna is alive and well, and has lived to double her life expectancy. And that’s all that matters in this moment. Hopefully, she still has many great years to come. Happy 5th birthday, Yuna.